It is difficult to comprehend the amount of chaos that was happening in the United States in 1917 as the U.S. military attempted to prepare training grounds and housing for hundreds of thousands of men at multiple sites around the country in World War I. The United States had never amassed the number of men for combat in its history to that point, even including the U.S. Civil War of the 1860s. In that conflict, a total of 3,263,363 men are estimated to have served for both the Union and Confederacy. In WWI, a total of 4,734,991 men served in the U.S. military.

Between June and November 1917, the federal government was busy acquiring land—through purchase, donation, lending, or eminent domain acquisition—for the construction of military training camps. Construction crews had to be found and building contracts approved, supplies had to be acquired and food services developed for the construction crews and incoming soldiers, and friction between the federal government and local citizens had to be mediated. The camp was completed in November 1917, at a total cost of 6.5 million dollars. Camp Sevier had the capacity to house and train around 46,000 officers and enlisted men.

Camp Sevier in Greenville County, S.C., was a developed as a temporary cantonment site created to train federalized National Guard soldiers during WWI. Soldiers from South Carolina National Guard units began occupying the site on July 10, 1917. Before military training could begin, the land had to be cleared and facilities constructed. Construction on barracks and camp buildings began a week later, with the formal establishment of the post occurring on July 18, 1917. Once all National Guard units had reported to Camp Sevier, soldiers were trained in a range of common infantry skills and in new means of warfare—such as gas defense and machine guns. Covering about 1,900 acres, Camp Sevier provided a great amount of room for artillery instruction as well. This first group of guardsmen was formed into the 30th Division (or “Old Hickory” Division), which trained at the post until May 1918, when they shipped out to France. All of the North Carolina National Guard units were assigned to the 30th Division.

Still, these new camps were not always built to the highest standards. New Progressive Era means of sanitation, bathing operations, laundry operations, and trash disposal were difficult to implement quickly enough for the use of 46,000 people in the space of 2-3 months. The technology, knowledge, and means was not immediately put in place by the U.S. Army, as they had never organized this large a number of individuals. Sanitation in particular was a major issue at military camps. Numerous bacteria and illnesses were spread to a large number of soldiers, that taxed military hospitals and the small number of military doctors to attend to the issue. Bathroom facilities often consisted of trenches or pit toilets, outhouses or "sanitary closets," mass latrines, and other bathroom facilities that ranged in types from various camps. Most military toilet facilities did not have running water for toilets, which exacerbated the sanitation issues in military camps.

Although not a friendly topic, the disposition of human feces proved a difficult matter at Camp Sevier, especially for North Carolina units of the 30th Division. In an effort to find a cleaner area to use or one freer of smells in some cases, soldiers with the 30th Division (including the 113th Field Artillery), ended up going to the bathroom or disposing of piles of human waste out of the camp on civilian woodland that bordered the camp. 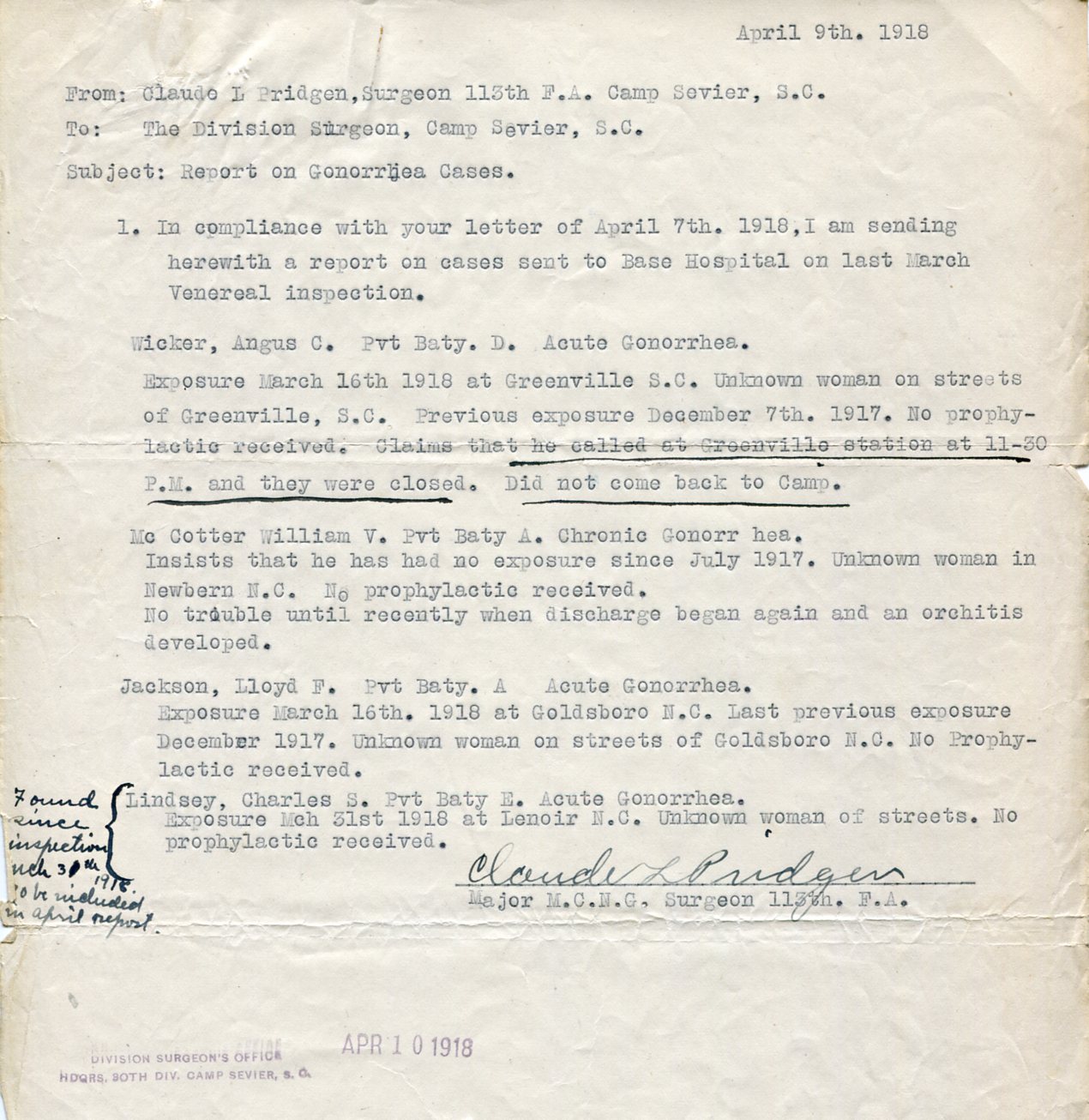 Two civilian land owners in particular—W. A. Edwards and a Mr. McCarter—complained to U.S. Army leaders and the U.S. Public Health Service regarding the matter. On January 21, 1918, an administrator with the Public Health Service named D. J. Prather wrote a letter of complaint and recommendation to the U.S. Army commanding surgeon at Camp Sevier, Lt. Col. A. M. Whaley. As noted in the letter, Prather admonishes “It would materially aid us in our efforts to sanitate the civil zone [civilian population] if you would make an effort to have this practice discontinued.” Stopping such practices by random soldiers or units would help stop the potential spread of any diseases or bacteria from soldiers throughout the civilian population of Greenville County, S.C. Finding the balance between public and military sanitation continued to prove a challenge throughout WWI, both in the United States and in Europe.