Because November 2018 is American Indian Heritage Month, we wanted to share the following blog post containing a first-person perspective about being a Cherokee Indian soldier from North Carolina in the U.S. Army during World War I. 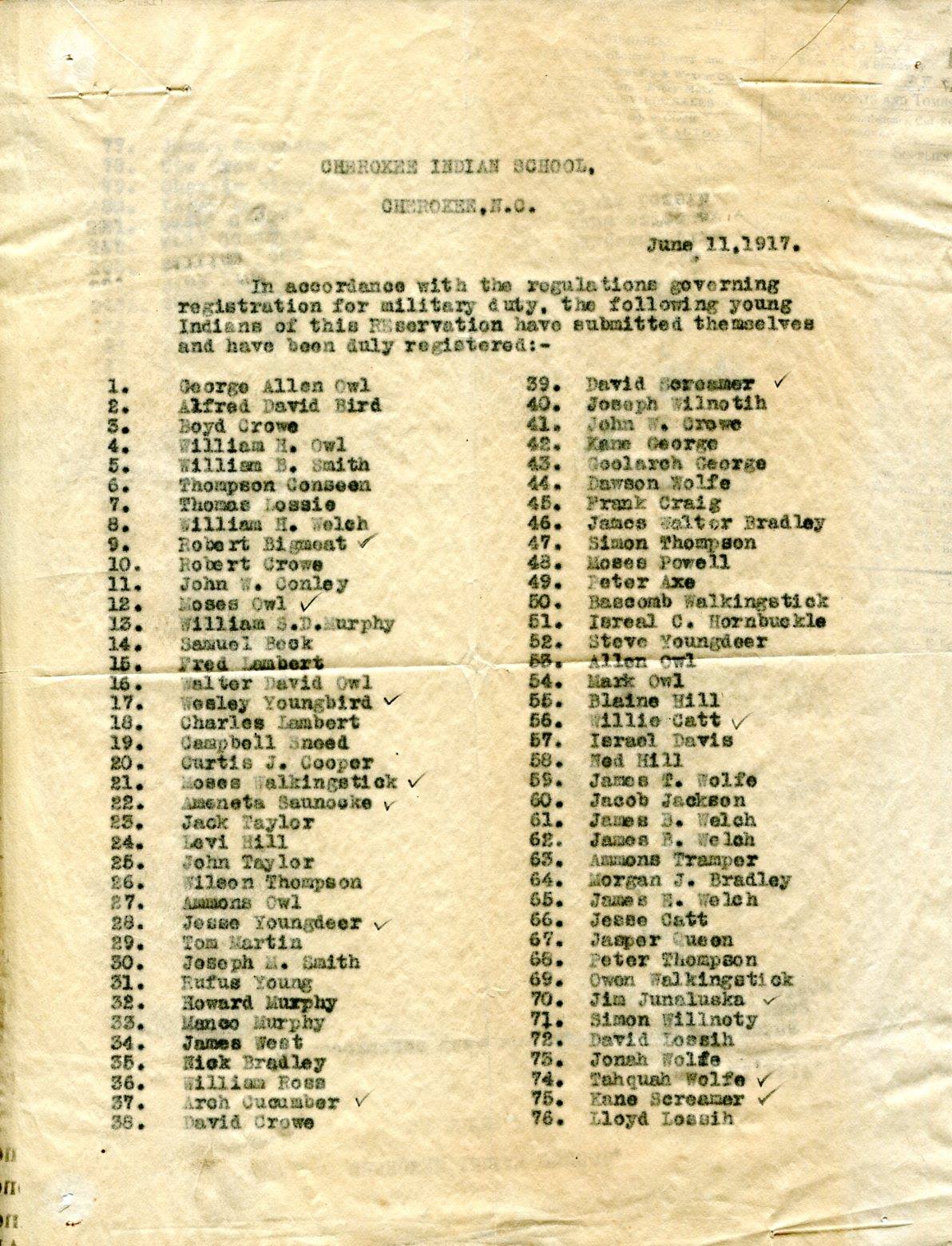 Around the end of April or first of May 1918, the Bryson City [N.C.] Times newspaper published a letter sent to it by Eastern Band of Cherokee Indians member George Allen Owl [Sr.] of Cherokee, N.C. The letter and commentary on it was published by the Asheville Citizen-Times on May 8, 1918, as the article titled “Cherokees Follow In Paths Of Forefathers.” This letter by Owl is one of the few first-person documentary pieces available on North Carolina’s Cherokee WWI servicemen. It should also be noted that George Owl was the first person to register on the Cherokee’s reservation at the Cherokee Indian School in Cherokee, N.C., on June 11, 1917.

George Owl would serve in WWI in Company I, 321st Infantry, 81st Division, U.S. Army. He served overseas from the first part of August 1918 through June 1919. Owl reached the rank of Sergeant during his military service.

What follows is a transcription of Owl’s letter, documenting his and his fellow Cherokee soldiers’ life at Camp Jackson, S.C., training in the U.S. Army for WWI:

“Since coming to Camp Jackson we have tried to be soldiers as our ancestors would like to have us be, true, strong and obedient. I know little is heard of us, but as long as we do our duty we do not care.

As you probably know, some of us were sent here with very great disadvantages. We have had little education, and in fact some have never been in a school house to try to learn anything. Are we the same people now that we were when we came? We say “no!” We were used to having our way—what we said or did was all right, now it is different. We do as we are told by people who are put here for that purpose.

People, there is no end to the chance for learning here in the army. Every minute there is something to be learned, and one who does not take the advantage is no soldier. It is said that the army life is hard life, and in many respects it is, but are we going to stop and listen to such talk when our country is in need of us? Are we not willing to sacrifice a few things to help protect our country?

The Indian, as far back as one can read, has always been willing to fight for his country, and it is true today. Though ruled by people who fought us for this same country, we are not quitters. We are going to fight for our country as long as we live in it, and we are proud to have a chance to fight for it.

There were fourteen Cherokee Indians here, but now we only have twelve. Two were given their discharge for physical disability. One of our number has been in the base hospital for four months, but all the others are out preparing to get the kaiser’s [Germany’s ruler] scalp All have made good records as soldiers, and one has been made a corporal.

The corporal has made quite a reputation as an athlete, and he has shown his ability as a jumper by winning both the high jump and the broad jump in a recent test held in the camp. At present he is on the Davidson baseball team which represents the camp, and he has taken part in all games that the team has played.

This is only a word to let people know that we are not dead, but we are willing to die for the cause we are here for.” 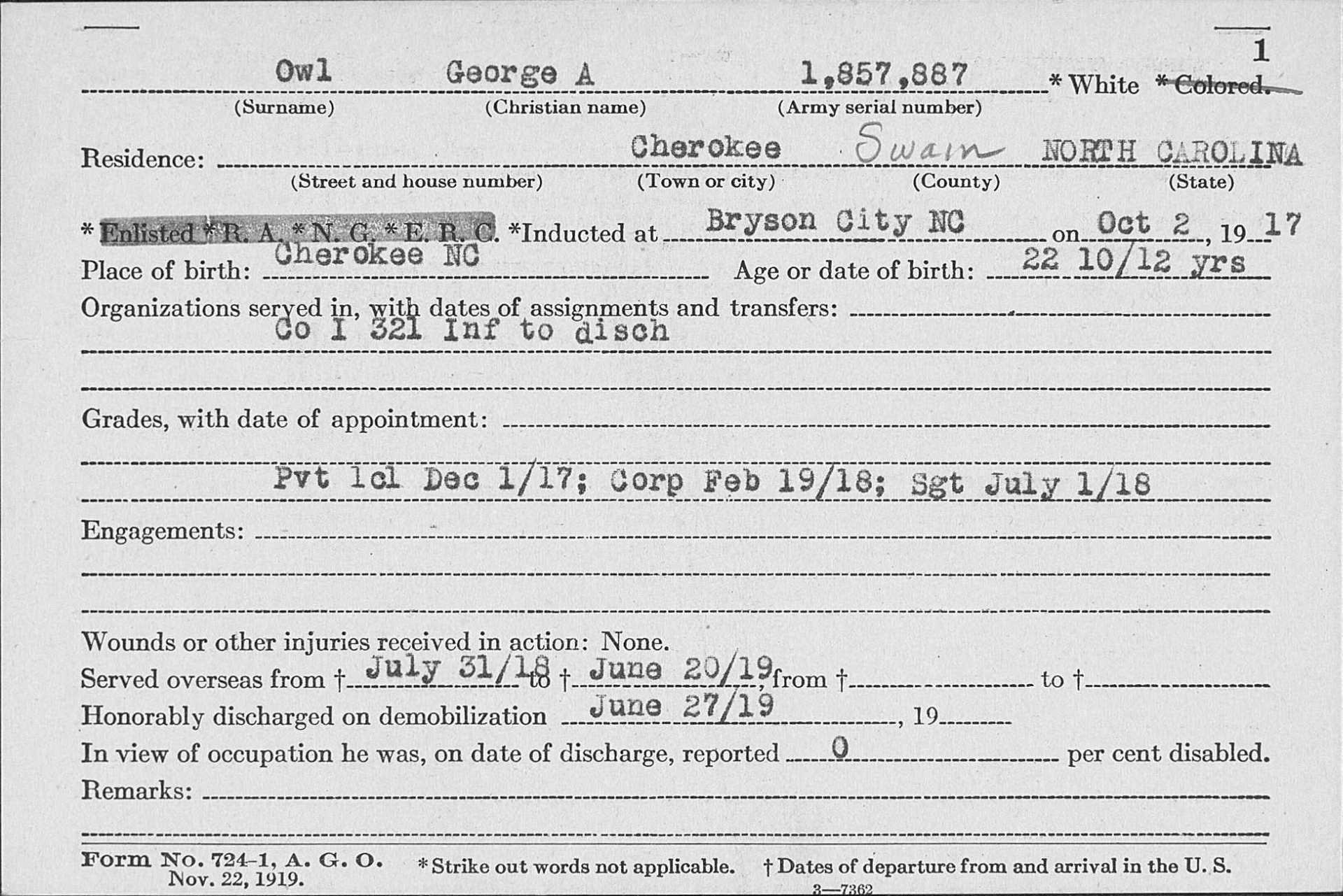 To see the larger size of the Company I, 321st Infantry Regiment, panoramic photograph with George Owl, check out the State Archives of North Carolina’s digital WWI collection in the North Carolina Digital Collections.