The Carrboro, NC supergroup Speed Stick is an ever-evolving project among a group of friends—Ash Bowie (Polvo), Charles Chace (The Paul Swest), Laura King (Bat Fangs), and Thomas Simpson (The Love Language)—whose musical achievements reach back as far as the 1990s.
We spoke with Charles, the catalyst for the band's first show, who caught us up on the band’s beginnings, his approach to music, improvisation, and art. 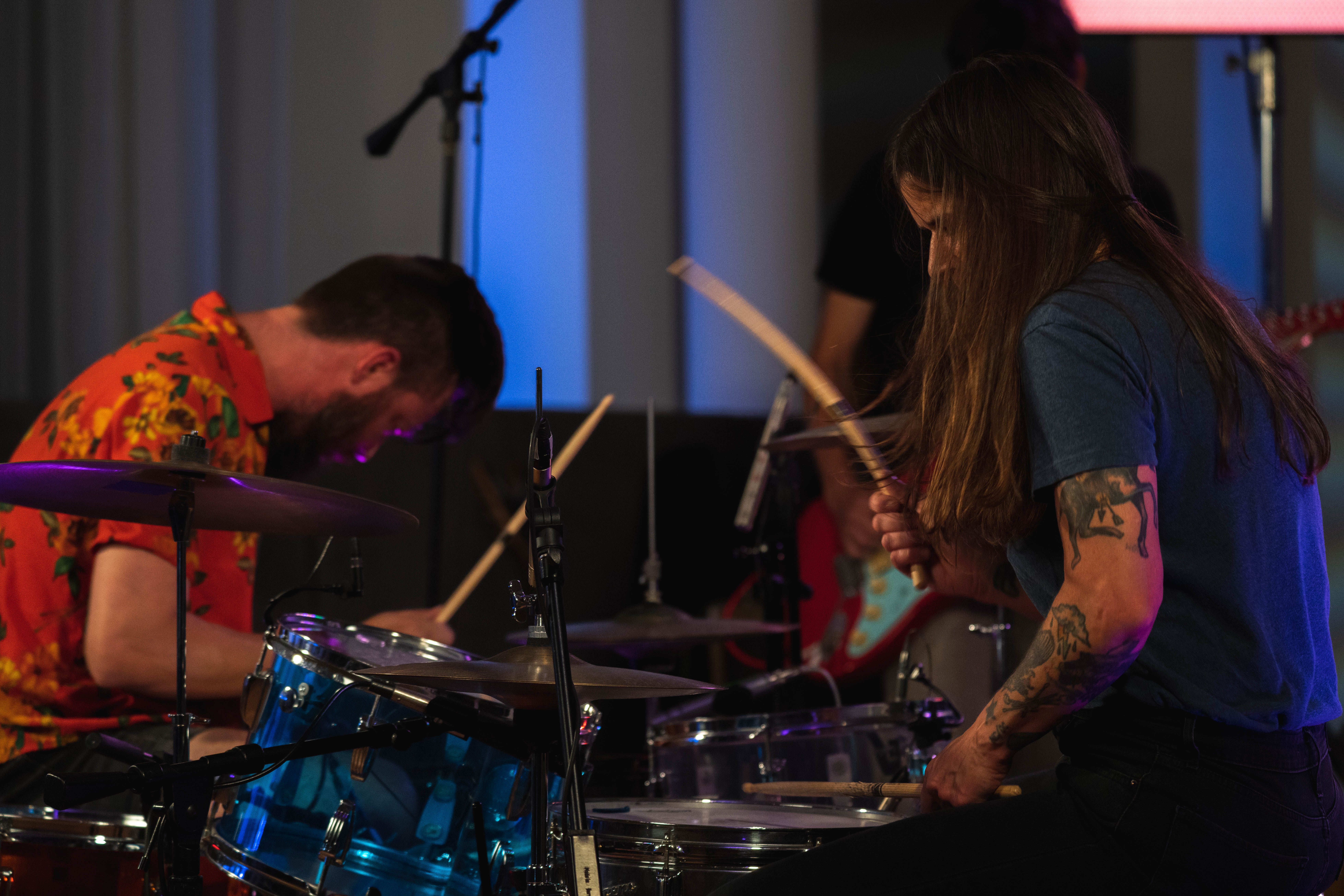 Charles plays guitar for the group and is also in a free jazz band called The Paul Swest. He was raised on the cape in Massachusetts but has lived in Carrboro since 2011, after a stint in Florida.

His dad loved music, cheesy blues being among his preferred tunes. Charles’ musical entree could have fit in a John Hughes movie; he recalls playing a tennis racket to Kiss and jamming to a Chuck Berry 8-Track. Around 19 he followed his friends’ lead and picked up a guitar. His tastes got heavier, and punk bands like The Butthole Surfers became de rigueur.

Neither of his folks were artistically inclined, but Charles said he was “always drawing,” which he pronounces with an invisible “r” after the “w,” a product of his Massachusetts upbringing and a speech pattern that he says is “a real problem considering my dyslexia.” This natural filter could be part of the reason he’s always rejected mainstream sensibilities, or at least questioned them. He chuckled at his tendency to play devil’s advocate, something he’s done all his life.

“I was always trying to deconstruct things, to do something new. But at the time I didn’t know that was the artist in me. I don’t think I see logic the same way, which leads to a lot of arguments with people, even though they are completely right and logical. I’ll always find a small window of doubt. But, when you’re always doing that, you’re always ready to improvise.”

The community in Carborro and in the south has helped him open up, and to manifest his creative ideas. Covid has been, for him, similar to the rhythms of his home state, Massachusetts.

“During Covid, nobody was seeing me or embracing me, giving me hugs or being loving. In Massachusetts it’s like, you look cool but I don’t have time to know you. It’s a lot of pretension along with the cool and the hip. But everybody doesn’t have time to talk, maybe because it’s snowing or something. But Covid was like, oh, I’m home again. I know what to do with this.”

In an odd way, the last year was freeing for him. He bought bright pink sneakers (which he rocked at Music at the Museum) and embraced a newfound desire to express himself more fully. Now, if he has an idea, he’s going to do it.

This creative and artistic impetus, which led to sleepless nights and a house filling up with drawings, has helped drive Speed Stick’s growth, whose record “Volume 1” came out in 2020.

Charles created the artwork for the record, with a minimalist approach that was inspired by his love of record covers and their capacity to draw people into a musical experience they might not be expecting. He pondered the finished product “is it cool? Too cool?”

The songs for Volume One were created in an unusual fashion over the course of a year. Initially, Speed Stick only consisted of two drummers, Laura and Thomas. They distributed nine studio tracks and a single live track to select musicians along with a simple task: draw inspiration from the beats in order to create music that spreads laterally and horizontally, like a rhizome. Indeed, Volume One has utterly discarded the yoke of the genre by instead tethering intricate, interlocking drums to myriad creative personalities: Mac McCaughan (Superchunk), Kelley Deal (The Breeders, R. Ring), Mike Montgomery (R. Ring), Stuart McLamb (The Love Language).
The album’s genesis was unexpected and, according to Charles, rare.

“Laura and Tommy have a lot of friends that are artists. So, they came over to my studio and played drum beats with certain people in mind. These folks did not know they would get these beats. The idea was to create and to send the pieces to our friends, and let them do what they wanted. They could play along like Ron Liberti did, or cut them up, like Ash and I did. And people slowly came back with songs that they had created, with total freedom. They were all gifts. Laura and Tommy made it happen. It’s not often that drummers send out beats and say write a song but it worked.”

Essentially, they put the word out and the community responded, organically. The album reflects the disparate styles and tastes of its contributors. One track, Twin Collisions, is very pop-sounding, while others are punky and ethereal, relying on echoing drums or deeply resonant keyboard.

The point, Charles emphasizes, is not a cohesive sound, but that there be room for collaboration and exchange, a conversation within a tight-knit creative community.

If you’ve heard the album, you know very little about what Speed Stick is like as a live act. To participate in a Speed Stick show is to enter a space of bodily and psychological endurance. Off-kilter guitar riffs shadow the raging intensity of drums; blistering drum beats to dance to the feedback of guitars. It’s a raw, rockin,’ sound, with a lot of swirly guitars and pedals and dual drum-sets pounding out beats that seem plucked from nowhere. Speed Stick improvises its shows and walks a fine line between cohesion and chaos. During the group's performance at Music at the Museum, the small audience, consisting mostly of crew and museum staff, found itself leaning into the noise.

“There’s a level of almost failing that crowds really respond to. It must be something that makes you pull for something in you to avoid a catastrophe. We kind of lean into the things that are going wrong and try to create something new out of it.”

There are no fan-favorite songs at a Speed Stick show, everything is new, requiring the audience to commit and hold on.

Perhaps unexpectedly to those unfamiliar with the dynamics of improvisation, Charles finds more freedom in Speed Stick than in his other group The Paul Swest, a free jazz band.

“There are more rules, I’m in prison with the Swest. Speed Stick is the in-between parts of improvisation. It’s about piecing something back together but remembering that it happened. Like a collage, but with some of the mess still in it.”

Charles is excited about the Carrboro music scene. He hopes to see more projects be finished and he dreams of creating a real noise scene, an offshoot of his obsession with free jazz. He sees the triangle as a space that could welcome artists who have done the New York scene, where they could just make weird sounds, and experiment.

“I think the scene is gonna grow more because people have more access to equipment they need to create at home. They spend just enough money to get what they need, and persevere. That’s the funnest part, when the music is in the hands of the creators.”