Keenan Jenkins is good at school. He excelled academically in his hometown of Rocky Mount and was admitted to the North Carolina School of Science and Mathematics.

At the Durham School of Science and Mathematics, he met a roommate with a guitar. He’d fallen in love with music playing the clarinet in a middle school concert band, but the guitar encouraged him to start analyzing music, to understand it beyond what it made him feel. He hasn’t put the instrument down since. We sat down with the artist to learn about his music, local creative ecosystems, and his hopes for music in the Triangle. 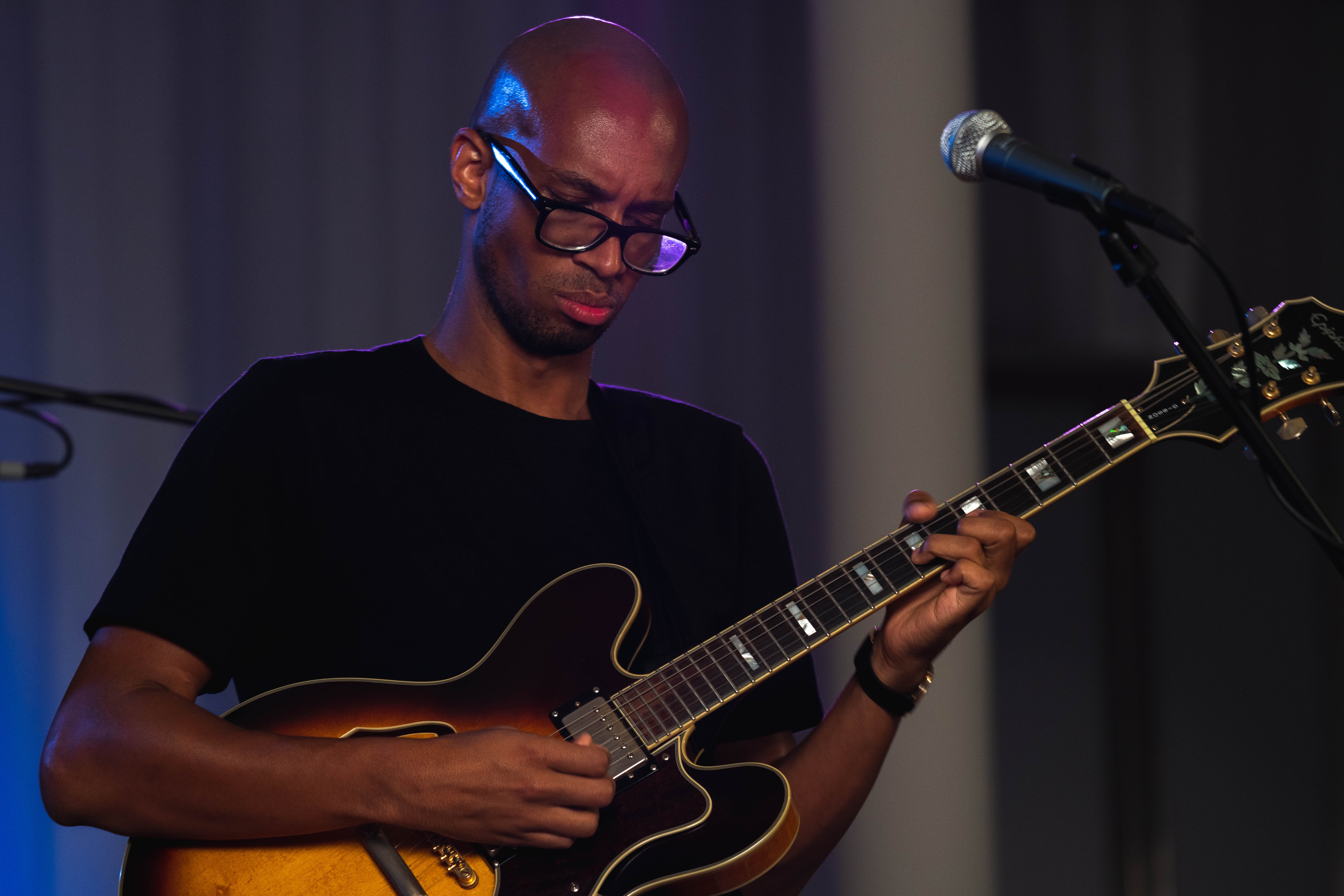 When he plays, he keeps his guitar cinched high on its strap, cradled to his body, and during his Music at the Museum performance, his eyes often closed, giving the impression that he was floating away on the lush flowing vocals and riffs that define his music.

“It was a lot of fun, it was a dream come true and a goal achieved to perform.”

It took him a while to get good enough to perform, and in his words, he had “no grand illusions, or delusions” of making it big. Originally, he played for the most part in his dorm room, until he got to college, where he started attending more open mics. These were integral to his progression and opened his world to a welcoming group of musicians and creatives.

Sometimes things take a while. It wasn’t until 2015, 9 years after he picked up a guitar when he decided that would create “for real.” His own music, his own style.

Jenkins’ EP Worthy was, at the time, the culmination of his relationship with music, and the Indy called the project a “pristine EP of soul-and-jazz-inflected alternative rock.” It’s jazzy, soulful, and soaring and features Jenkins’ falsetto, a crooning thread that gives the listener a place to come back to after getting lost in the echoing waves that build the EP’s sonic landscape, along with lyrics that describe a search for self, a declaration of agency, and a passion that freezes and burns.

Jay-Z released Reasonable Doubt when he was 26, and said that it took him 26 years to create it, that it was a reflection of his life and experience up to that point. Jenkins’ echoed the sentiment.

“Like Reasonable Doubt, at the time I felt that Worthy had taken me 28 years to create, my whole life at the time. And after releasing it, I was bored with that subject matter, and wanted to create something new."

That something new came last year when he, among other artists, was asked to collaborate on a compilation from TRACKS, a music library out of the Chapel Hill Public Library that comprises local artists, curated by local creatives. During a time of incredible uncertainty for the music industry, and particularly for small, locally based artists, the collaboration felt affirming for Jenkins’ who, despite being a 10 year veteran of the triangle music scene, had his eyes opened to a huge range of new, young artists.

He loves the entire TRACKS project, and what it represents about Chapel Hill, Carrboro, and the triangle writ large.“Geographically, Chapel Hill and Carrboro are small, but culturally, we loom pretty large. That’s evident in the TRACKS music library. I thought I was entrenched in the local scene until I found TRACKS.”

The TRACKS compilation We Rise as Allies is rounded off by XOXOK’s track "All In," a love song that reminds us of the rewards of a commitment to someone (or something) beautiful. He’d been wondering what to do with "All In" for a while, and when TRACKS called, he knew it was the right fit. Just as excited to see what other musicians were doing, he considered it an “honor to be on the same album with such great artists.”

"All In" is one of his few love songs, and his usual style goes from pensive and wandering to pointed and declarative.

“I was in love, and I am in love still. It is just about being in love with a partner, but it can mean whatever it means to whoever hears it.”

Jenkins’ has a wealth of influences that guide him as his music continues to evolve. Artists like Solange, Moses Sumney, Marvin Gaye (specifically “What’s Going On,” the full album, not just the titular track), and Frank Ocean all provide structure to his own musical search for self.

“Somewhere in my failure to be them I will find myself and find what makes me unique.”

He is no stranger to finding himself in pursuit of something else.

Jenkins’ got his Ph.D. a few years ago, and it was partway through his degree that he realized music was something he needed to pursue, and that in fact, he wasn’t much of a researcher, a necessary quality for someone with a doctorate. Luckily, the flexibility of academia allowed him to put substantial time into practice and gigs, and, having already completed a large part of the program, he did the work, kept up with his courses, and made it out with minimal requirements. He’s ok admitting that now and encourages everyone to jump through the necessary hoops to achieve what they need.

Recently, he was chosen as an artist in residence at the Level Retreat and knocked out a lot of work. He’s sitting on a song, and while he’s hesitant to say that he’s putting out an album soon, we can expect many things from the artist in the future. He’s not sure where Chapel Hill and Carrboro are headed, musically. It’s been a rough year. He does see continuing opportunities for musicians. And he hopes that the solidarity and support and collaboration that increased last year continues. As far as he’s concerned, he’s all in on the music.

“I’ll wake up tomorrow and continue to choose music.”